It was on a clear, bright cloudless late autumn evening that I had my first phenomenal communion with Sacred Geometry. My partner Jiva and I were living in a cabin in a friends field deep in the fairly land of Somerset. We had received a request from the consciousness we were collaborating with to witness the Sunset that evening in order to receive some information.

Sundown, an hour away, the high heavens melted into deep turquoise as the Sun approached the Celtic tree circle on the near horizon. Our eyes were drawn to stare into the Sun and almost immediately we were able to differentiate the beams of light that pulsated so miraculously from this grand star, as liquid gold fractal transmissions, an unremitting endless code of light intelligence. This light code, a cascade of radiant matrices, holding the evolutionary harmonic, merged with life rhythms, pulsating out from the Earth’s bio-spheric aura. The embrace of these two potencies of creation we realised to be the Sacred Marriage of the Mother of Form and the Father of Consciousness, the Quantum Tantra of creation. As I sat there in the field I felt the magnetics of an ultra Earth awareness enter through my coccyx and rise up to greet the cosmic forces of creation that entered through my occiput and descended down my spinal causeway, I understood my connection to the Earth and the Sun not as some bystander but as a conjugal mediator. It was through my very being that their courtship of creation was taking place. My consciousness was a symbiotic component within their Tantric union. I felt this great love between these two sentient sovereign celestial and Earthly entities imbue my physical matrix with the Amrita of an immortal continuum.

All of the natural world that surrounded us revealed itself as a series of codes and counter resonance building between the two a matrix of archetypal patterning that translated this relationship into the principals of matter. Expressing this alchemical Tantric union as life forms that walk, fly and swim. Clothed in fur feather and skin. Trees, flowers and shimmering wings, all sprung from a palette of light.

These codes are written in the language of light, geometry, Sacred Geometry. Our communion with Sacred Geometry is a fundamental aspect of our evolutionary awakening.

In order to fully appreciate Sacred Geometry and to understand why there is at this time such a huge world wide surge of interest in it, it is necessary to evaluate the state of the Human genetic code: the DNA.

It is no secret that 90% of this genetic material is non-functioning. It has become a known fact that out of the 3,000 billion base pair chemicals that make up this code, only 60 million are active. Contemporary physicists have discovered that this dormant genetic material is not ‘junk DNA as put forward by orthodox science, but is in fact a living data storage system. A library of human potential that when unlocked and resurrected will put an end to suffering, disease, conflict and death itself - rendering the human a fully realized conscious entity able to access any time or energy level in the Universe.

Through alternative healing methods we have become aware of our electromagnetic energy fields and the importance of our neurobiology and biochemistry. Through this and the discoveries made in the area of genetics we are becoming aware that there is a science to spirituality and that our chemistry affects our consciousness. Taking this further we are now making the connection between the mutant state of our DNA and the present global insanities of war, genocide and endless human suffering.

As humanity is awakening to a new body awareness we are driven to gain mastery over our own inner workings and to discover how we interact and co-create with the reality we find ourselves in. Instead of searching for the out of body experience in order to realize our spiritual identity, we are beginning to understand that our physical being is the manifestation of that identity. Realizing that the physical vehicles we embody will allow us to transcend this fear-based reality and create through the resurrection of our full human potential a new paradigm, a golden age.

In seeking more information of the ‘higher physics of creation in order to resurrect the full human potential we find ourselves in the realm of Sacred Geometry.

For the Human DNA code, like all else in the living universe, is built upon hyper-cooperative, interactive energy pathways of ultra-organized creative intelligence. The vibratory infrastructure of this energetic network forms the Human blueprint and is written in a literal language of light we call Sacred Geometry. All is light all is geometry.

In order to understand the implicate order of our own creation it is not necessary to intellectually comprehend its mechanical complexity. We simply need to expose our selves to the language it is written in the Sacred Geometric language of light.

Because Sacred Geometry is a configurative representation of the elemental components of the divine creative force it offers a direct conduit to prime consciousness Source. It bypasses the dogmatic perimeters of the intellect and transmits knowledge that exists beyond the reach of religion, philosophy, belief or disbelief; it is a pure language that cares not for the country you come from, the colour of your skin or your cultural beliefs, it seeks only to unify humanity by exposing the interrelating harmony that lies at the heart of our creation.

Sacred Geometric forms transmit the higher creation frequencies that resonate with our original blueprint prior to genetic modification.

One of the most important discoveries of the new quantum physics is that of the holographic nature of the universe. Each human is a fractal aspect of the universal hologram. Although the present manifestation of the human race is not representing the full potency of this hologram, due to its genetic modification, its potential exists within the soul covenant etherically embedded in the human matrix. The geometric language of light, that forms the underlying matrix of this hologram, is the alphabet of the ‘New Paradigm and holds the resonance of the universal holography.

As we commune with Sacred Geometric forms we interact with their fields of informational influence. Their energetic radiance emits a frequency that communes with our electromagnetic fields in search of a ‘like frequency with which to resonate. Through this resonant feedback the structural integrity of the original human ‘template present in the soul covenant is reinforced, creating a deep vibrational healing.

Sacred Geometry reinforces the human energy field through resonance. Protecting us from harmful environments and strengthening the immune system.

Daily we are exposed to the chemical, psychosocial, electromagnet, and religious manipulation of our consciousness. In the media, in our homes, we experience a continual bombardment of the fear frequency. TV’s, computers, cell phone, high-tension wires, & satellites, and 300 new chemical forms of pollution a year, relentlessly erodes our energy fields, draining our vitality. The material field is showing signs of decay, just as the fruit rots before the new seed of life is expelled. We are the new ‘seed race that will birth the new paradigm. As spiritual warriors in the battle for consciousness it is essential that we keep our heads clear and our hearts open. For in order to ride the upward spiral of evolution into the new paradigm we must align our frequencies with that of creation. Sacred Geometry assists us in this by reinforcing the integrity of our energy fields by recalibrating our resonance with the Source of our creation.

Various formations resonate with particular points within the body. For instance the 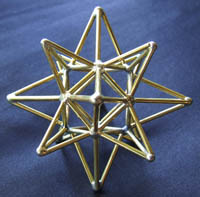 Heart Star, also known as a stellated cube octahedron is in frequency resonance with the heart chakras. While communing with it or simply wearing it, it brings strength in the form of electromagnetic life force to the circuits that feed these chakras. Bringing purification and balance to the emotions and healing issues of abandonment and betrayal. This form also protects against harmful electricity. 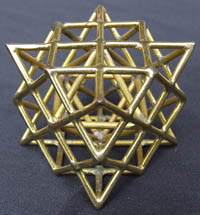 The Tantric Terra Prana Star, which is a nesting of a star tetrahedron and a cube octahedron is immensely powerful. Also known as ‘the quickening this form reconnects a deep circuit within the kundalini energy system and stimulates the thyroid, regulating the metabolism and protecting against electricity and microwaves. 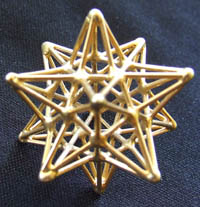 The Solar Star, or stellated dodecahedron, reconnects a circuit into the lungs, assisting the assimilation of the full spectrum of prana. It also connects the solar plexus accentuating galactic consciousness. This star is a three dimensional pentagram and holds the frequency of joy and Venus and helps to heal shame and grief. 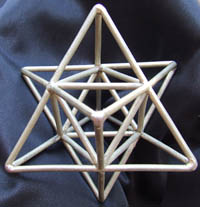 The Tantric Star, which is a star tetrahedron nested with an octahedron, brings life force to the thymus, thus strengthening the immune system. This form resolves the dualistic concept of conflict through it's definitive configuration of the ‘Trinity' and reconnects a circuit of deep neurological activation in the occiput. It is a very powerful protection from computers and mobile phones as its resonance brings strength to the energy field as a whole. All these forms and many more hold the frequency of the immortal blueprint that lies at the heart of the Human masterpiece. Our interaction with Sacred Geometry activates the cerebral cortex where the resonant receptor for this immortal human identity is stored in the “Temple Of Remembrance”. As we activate this library of remembrance, we balance the dominant over stimulation of the reptilian brain- bringing us out of fear awakening our quintessential identities as pure conduits of light and love. Connecting us to the benevolent Source of our creation.

Juliet Carter and her partner Jiva are authors of “The Template-A Holonomic Model Of Transcendence”, and international teachers of Sacred Ceremony and Sacred Geometry. Portions of this article have been taken from ‘The Template by Juliet & Jiva Carter. Copyright 2003 by Sowelu Publishing, all rights reserved.