These photos were taken by me in 2000, and some others in 2004. My second visit was even more magical than the first.

Needless to say, there is much controversy about these hieroglyphics. They are on two very high rock walls, which apparently was covered by another big rock that has collapsed.

There are actually other sites around Australia where there are hieroglyphics and other Egyptian relics. I have read many articles about these artifacts and pyramids that dot this country and the entire South Pacific. Rex Gilroy has documented what has been discovered in his books. Nexus magazine, New Dawn and Exposure magazines have printed articles on these sites and other controversial sites around the world.

The place where this site is, is around a very large bay, a perfect place for an establishment of a civilization. Similarly, the other main area that I know about where the Egyptians settled was around Gympie, Queensland, near Fraser Island and Hervey (whale) Bay, where the Humpback Whales hang out during their migration back down to Antarctica.

There was a pyramid in Gympie prior to white man’s colonization of these Aboriginal lands reported by the Archaeologist Henning Hassland, witnessed by him in the 1800’s. It even had a gold capstone. He later returned to this area years later after this colonization to discover that the locals had dismantled it, and used the stones for building. The capstone was in the hands of the local church for some years until they melted it down. A hugely significant archaeological icon gone forever. Assuming it has not been destroyed, there is or was still an intact pyramid near the mouth of Fraser Island on the main land where there is a military base. The pyramid is on this base, and last report, from a friend of mine who has snuck on to this base to see this pyramid, it was definitely there, but had been covered up somewhat by bulldozers.

It is obvious to me that the Egyptians got around, either via sailing or via space ships, or both. I also saw a documentary about the discovery of Egyptian sarcophaguses that had traces of tobacco and cocaine in there systems. These two substances are only indigenous to South America, you be the judge.

Other related articles and links are below my photos.

Directions: 1 hwy north from Sydney, exit 83 to Gosford. Turn right (near Kariong) at Woy Woy Rd. Then it's about 1.5 ks from this turn off. Just after you pass the suburbs/houses, you will hit bush, and a dirt turn off on the left. Park here on the side of the road. There is a metal gate. Start walking down this dirt road, maybe a kilometer (half mile). Turn left at the first left, keep going till there is another left. Just stay on the road, till you pass the Grand mother tree guardian on the left, (make sure to give her a big hug). And then walk towards Grandfather tree on the right. The one on the right is where the trail to the hieroglyphics are. You have to climb through the rocks to find them. 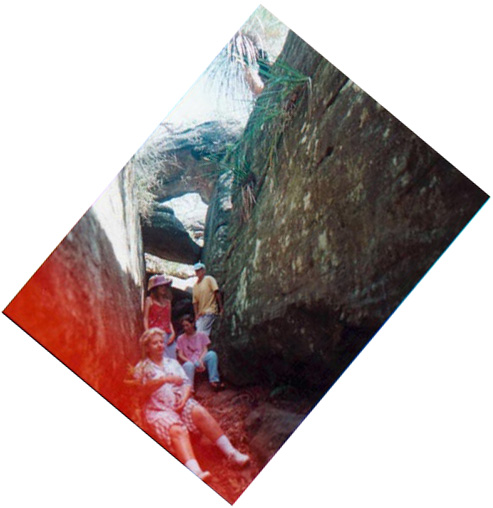 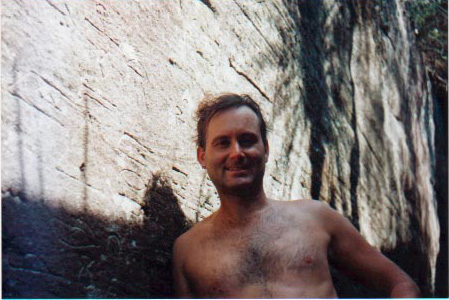 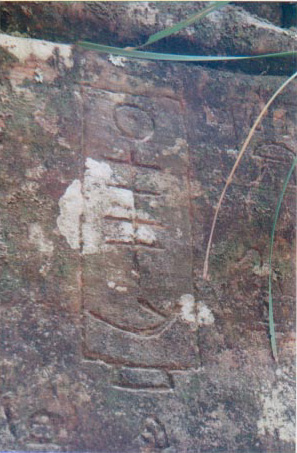 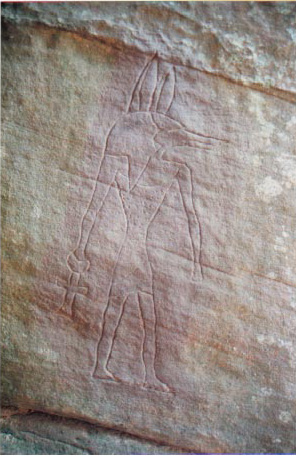 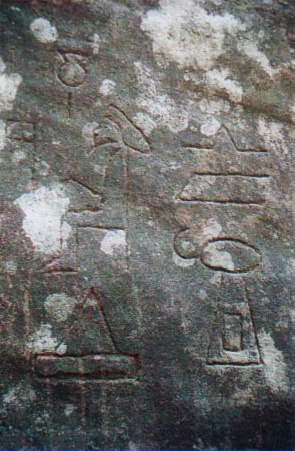 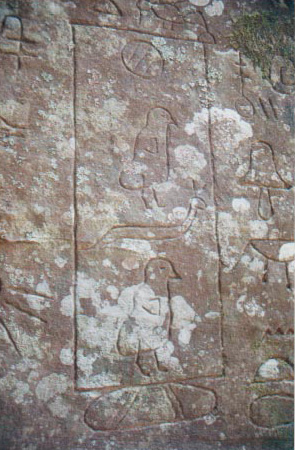 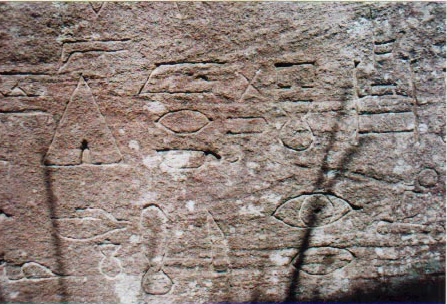 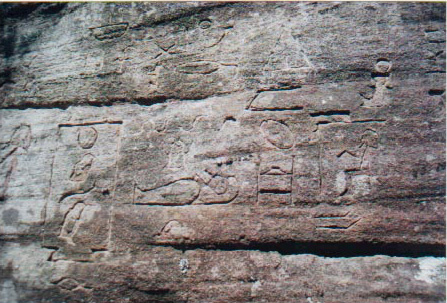 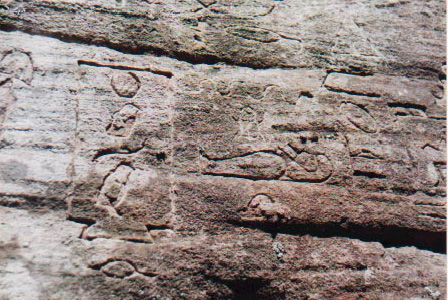 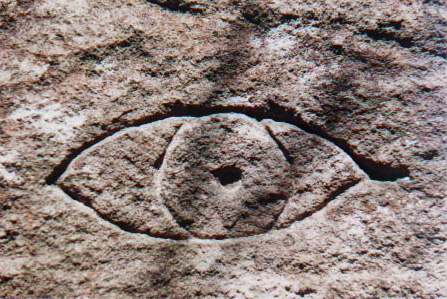 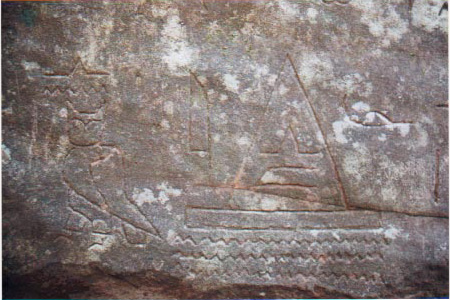 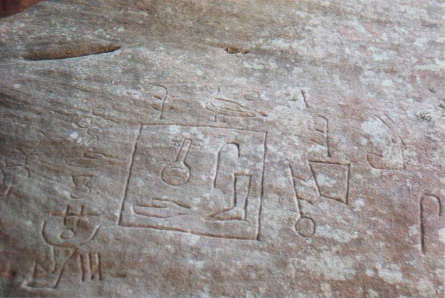 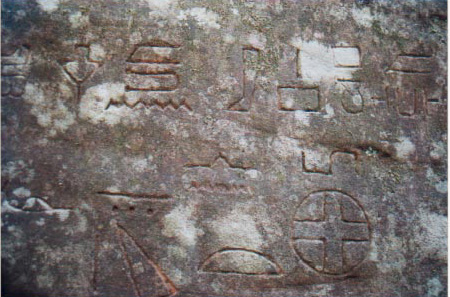 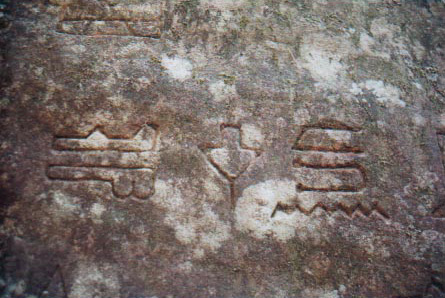 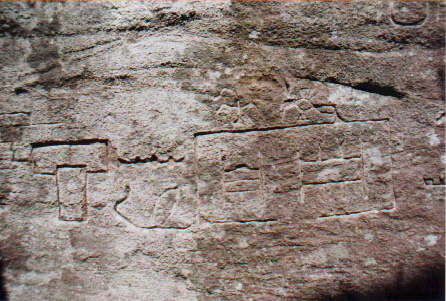 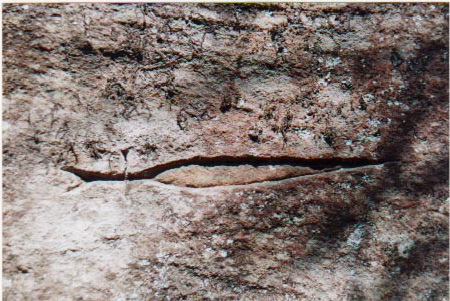 SacredSites.com - Places of Peace and Power. Anthropologist/photographer Martin Gray has visited and studied nearly 1000 sacred sites and power places in 50 countries around the world. This web site features hundreds of his photographs and detailed writings.

Nicholas Roerich - Treasure of the World